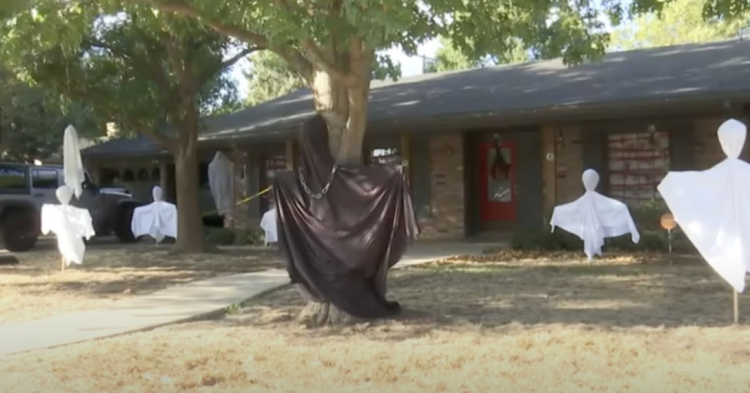 A Texas child has come under fire after posting offensive decorations outside of the family home. Because the decorations were deemed racist by members of the community, the family from Lubbock, Texas, has been forced to explain their intention behind the decorations. In conversation with a local news media outlet, the family spoke about their surprise for being called out regarding the holiday decorations.

The family happens to be new to the area. Perhaps, they didn’t realize that the people of Lubbock, Texas, take Halloween very seriously. While many people love to put up decorations for the scary holiday, the family managed to put up decorations that shocked their neighbors. After moving into the neighborhood in April, at the height of the coronavirus pandemic, they wanted to make a bang for Halloween and put up as many decorations as they could manage. 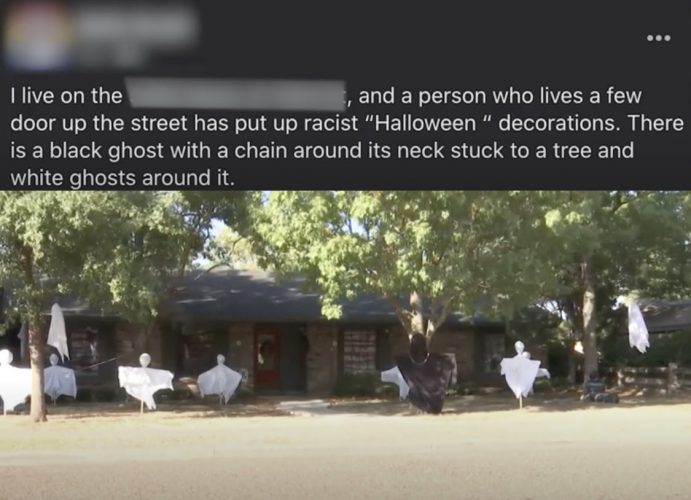 Although the family knew that Halloween in Lubbock would be different than it was in their previous town, they had no idea that the people of Lubbock were so intent on keeping tabs on each other. The family’s children adored Halloween and loved putting up the decorations as a family. But the community around them reacted in such a way that the family now knows that their decorations were not welcomed in Lubbock, Texas.

“There’s talk of trick or treating and the possibility of not being able to go house to house or trunk or treat,” the homeowner stated.

The homeowner watched the movie “Trick or Treat” recently and was inspired by the movie. They figured that they’d create a Halloween display that could not be outdone by other people in Lubbock. With the help of the family’s youngest son, they tried to mimic the decorations and set that was featured in the movie. Nevertheless, the family created a display that outraged at least one neighbor. 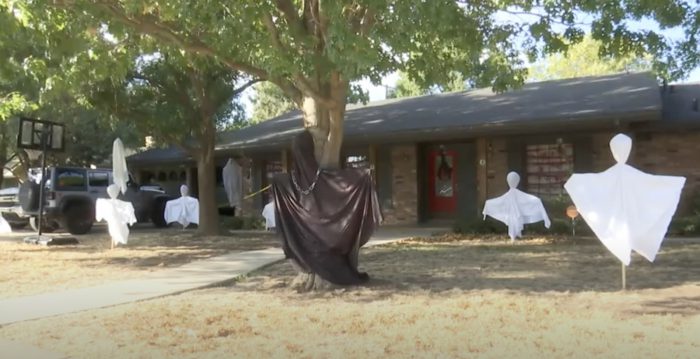 The offended person posted a photo of the Halloween display on social media along with the caption, “I live on the (street name) and a person a few doors up the street has put up racist ‘Halloween decorations.’ There is a black ghost with a chain around its neck stuck to a tree with white ghosts around it.”

However, the Lubbock homeowner felt that their display was not racist despite chaining a black ghost around its neck.

“Went and got them all sheets and broomsticks. We found a black sheet, and he was like, ‘Hey, this is going to be the warlock in the front yard! He’s the king of it all!’ I’m all alright, whatever,” the homeowner said.

The family denied racist motivations. They said their 12-year-old son came up with the “vision” of the Halloween display.

The homeowner stated: “It was kind of disheartening. I mean, it kind of threw us off. He’s the innocence of so many kids out there. I don’t even think he fathomed that thought.”

However, the community wants the family to be more considerate of racial tensions in the United States.

Do you think the Halloween display is racist or just a mistake?