After Soldier Dies From Wasp Bites, His Grieving Widow Gets A Surprise Nobody Saw Coming 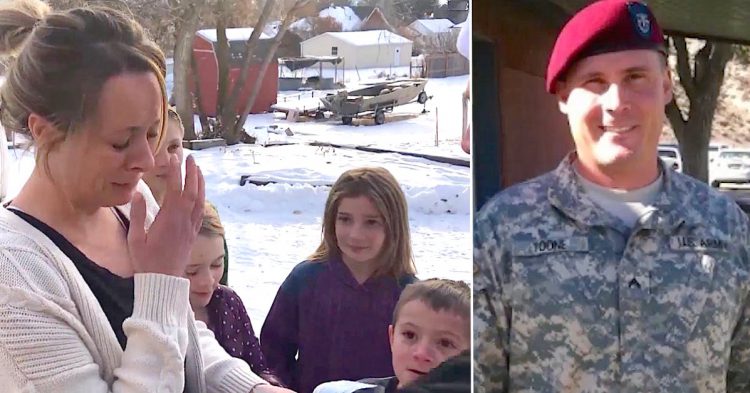 Every day he was on duty as a United States Army Specialist, 37-year-old Jon Toone risked his life in the name of America. Despite finding himself in dangerous situations all the time while on the job, it wasn’t military duty that would ultimately take him away from his wife and their four children. It was something a lot closer to home that would steal his life from him – three wasp stings.

Jon loved to work the land. His hard work with the military helped him buy. But it ended up being the source of his untimely demise. At just 37-year-old, Jon Toone lost his life because of the three wasps that stung him while he was out working in the yard.

When he was stung, Jon found it difficult to breathe. His heart started racing, and he knew that he was having some sort of life-threatening reaction. Jon called his wife and hurried back toward the house. But he wasn’t able to make it all the way back. He collapsed near the neighbor’s house on his way home.

Meanwhile, his wife, Abby, knew that something was wrong. She immediately called 911 when she heard the panic in Jon’s voice. Then she rushed to his side to attend to him where he’d collapsed near the neighbor’s house.

Before emergency crews were able to arrive at the scene, Jon had died. He passed away in agony. The only comfort that he had was that he was able to go to the great beyond while being held in his beloved wife’s arms.

Abby was not prepared for the sudden loss of her husband. Although she always knew that there was a possibility that she could be widowed – Jon had been in the military after all – she never thought he’d die from an accident in the yard. She thought he was safe being home with his family.

Life was an extreme struggle for Abby in the wake of Jon’s death. She had to remain strong for their four children, who were all under the age of ten. That was not an easy thing to do when the rock that had to keep her life steady was washed down the river.

While family and friends tried to help pick up the burden, no one could replace Jon. And no one was able to offer lasting support when it came to the income that Abby suddenly lost with the death of her husband.

However, she had one beacon of hope – Jon’s life insurance policy. So long as the insurance company did not try to pull a fast one, the influx of cash would help her and her family get through this tough time. Her salary as a cosmetologist was barely enough to get food on the table, let alone make ends meet.

But as fate would have it, an anonymous donor wanted to offer her and her family some holiday cheer. They heard about Abby’s struggles and offered her a no-strings-attached $10,000 to help ease the suffering that had been thrust upon the family. It was exactly the amount of money Abby needed to keep things from falling apart while she waited for the insurance money.