As Soon As He Saw His Receipt From The Cheesecake Factory, He Knew He Was Going To Sue 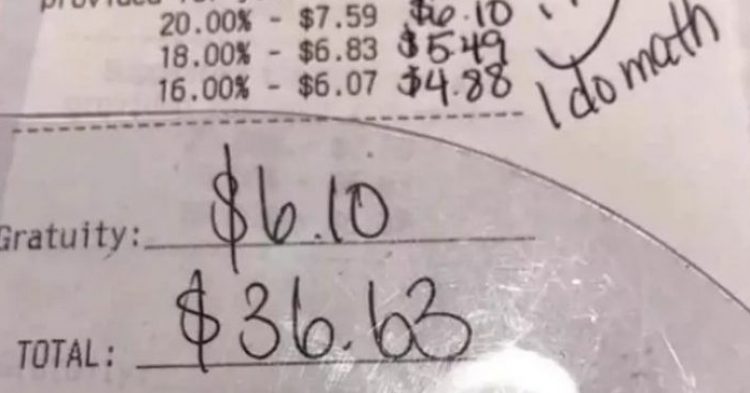 Waiters and waitresses make a pretty decent living, considering they don’t have a minimum wage and are usually paid peanuts for each hour worked. They make up the vast majority of their income through tips, which are entirely up to the customer. It encourages the servers to be more cordial and give the guest a better experience, but it can also lead to issues with cheapskate customers that don’t want to tip.

Most people leave a 15-20% tip for decent to excellent service, perhaps going above and beyond that percentage if you are especially wealthy or received truly spectacular service.

This number works out well for both the servers and the customer, and it has been that way for many, many years. But with the advent of credit cards and digital transactions, the opportunity to take advantage became a bit more obvious.

One restaurant found itself in hot water for its practice related to the receipts given to customers. You have probably seen a receipt with a suggested tip on it, and probably just thanked them for calculating it and signed the paper.

What you may not know is that some restaurants have been messing around with those numbers and trying to hide it from the customer.

Marcel Goldman has now brought a lawsuit against one of the largest restaurant groups in the world, The Cheesecake Factory. There are over 200 Cheesecake Factory restaurants spread across the world. Every single one was robbing their customers right in front of their faces for a long, long time!

Goldman exposed their illegal recommended tip practices after noticing something was off with his bill. He paid $38.50 for his meal, yet the recommended tip was over 40% of that amount.

The discrepancy comes when they add up the total bill. Each recommended tip is actually the amount that the total party should pay, not each individual diner.

Most people would just take the tip at face value and sign the paper, not even thinking about it. But you may want to be a bit more eagle-eyed the next time you go out to dinner.

If you get the best service you’ve ever had, perhaps a 40% tip might be reasonable to you. That obviously depends on your economic situation, and personal generosity but no server would be upset with a 15% tip. The fact that this massive restaurant chain tried to scam thousands of customers out of their hard-earned money is a travesty.

Time to sharpen up those math skills, because nobody deserves to be taken advantage of like this. Cheesecake Factory responded to a Buzzfeed inquiry about the issue, but they refuse to take responsibility.

“All gratuity amounts listed on our guest checks are suggestions only. Guests are free to tip as they please,” spokesperson Alethea Rowe wrote in an email.

One review on Yelp even claims that Cheesecake Factory told them it was a “decision by our company executives to use this figure and we do so in all of our restaurants nationwide.”

Did you know that Cheesecake Factory was home to such an obvious scam?