Behind The Scenes Video From McDonald’s Has Some Customers Boycotting

Everyone knows that you don’t really want to know what happens behind closed doors at McDonald’s. As the world’s most popular fast-food chain, the restaurant has a lot of “secrets” to keep, including what really goes into their Big Mac’s secret sauce. But now that a TikTok user has come forward to show what goes on behind the scenes at a McDonald’s location, people are vowing to boycott the fast-food giant for the rest of their life out of pure disgust for the truth.

The clip was uploaded to the Chinese-created social media platform by user @thatonedepressedginger. This person showed exactly what goes on at McDonald’s locations now that they are pushing their saucy “McRib” option all over again. The clip shows employees tossing a frozen slab of meat across a table, in which the gunk of “ribs” are shown stuck together in a big blob of barbecue sauce and fat grease. 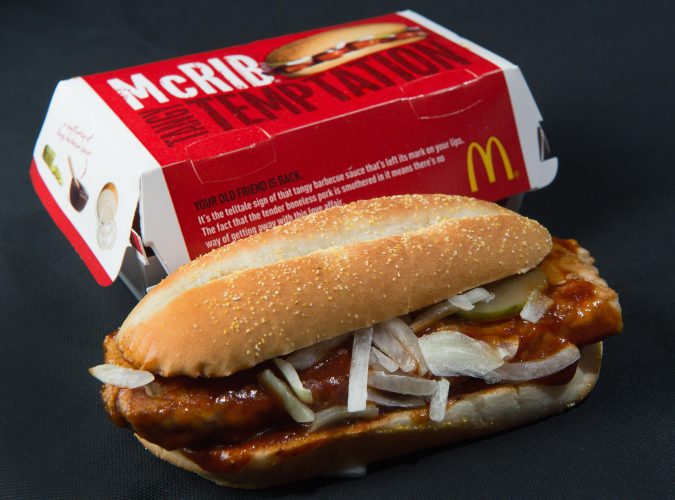 The video was captioned with the single word, “Nasty,” and sparked a similar reaction from people across the globe. Because McDonald’s is known almost everywhere on Earth, people were eager to see what happens at the establishment when corporate thinks people are not looking.

Millions of people saw McDonald’s secret and were disturbed by what they saw. Some people even noticed how the new McRib looks like “Styrofoam” before workers do their due diligence on the hunk of frozen meat to make it edible for the mass market consumer.

“What do you expect? It’s cheap as hell,” another added.

The McRib was a favorite sandwich when it debuted in 1982. It has been in and out of stores for years. The last time it was available for mass consumption was back in 2012. Since it launched in the 1980s, McDonald’s has periodically brought back the McRib as a limited-edition menu item. They need to make sure they give the general public enough time to forget how bad the product is before they bring it back for another chance to make them some money.

A few people were unbothered by the insider look into the McDonald’s kitchen. Because real ribs are a luxury item for most Americans, one user was shocked that people thought McDonald’s was using real ingredients in their sandwich.

“Did they expect them to use real ribs? They’re expensive,” one user wrote.

When the McRib was re-released this month, Linda VanGosen, vice president of menu innovation at McDonald’s, said in a statement: “The McRib had been a beloved menu item at McDonald’s since its inception nearly 40 years ago. There’s nothing quite like the taste of the McRib. To our customers, it’s become more than a delicious, saucy moment . . . it’s a season, and it’s taking the internet by storm. That’s why this year, we’re proud to serve the McRib nationwide for everyone to enjoy.”

Is the McRib something you try to purchase when it is available, or is this a McDonald’s menu item that you avoid at all costs? Or do you think it looks “nasty?”