Bette Midler has never been one to hold her tongue. As the star of “Hocus Pocus,” Midler has earned thousands of fans on both sides of the political aisle. However, more recently, she has been coming forward with a lot of criticisms for President Trump and his family. However, Midler may have crossed the line when she published an obscene poem about Trump and his wife Melania that has people on the edge of their seats.

Midler has been a vocal critic of the Trump administration since day one. Because her remarks against Trump have been growing more frequent and more intense in recent weeks, Midler has becoming more and more prominent as a leading figure in the anti-Trump movement. Because she is not afraid to put her reputation on the line to throw Trump and his family under the bus, Midler takes advantage of her large following of 1.72 million people on social media to tell them something that many people found controversial. Did she cross the line with this recent form of creative expression? 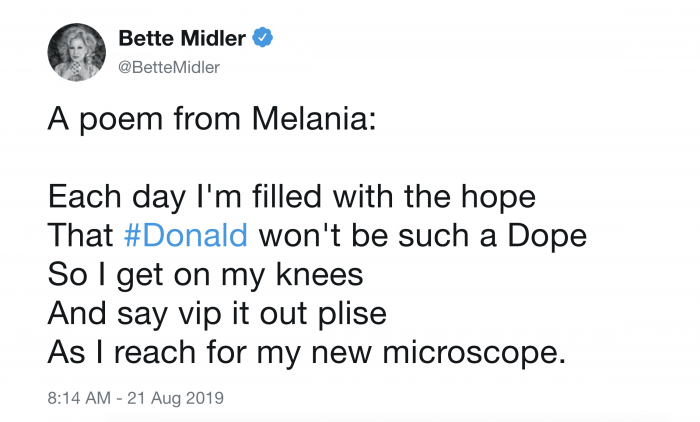 Midler posted it on August 21, 2019, and received an immediate response from the people who followed her – and those who dislike what she stands for.

Here’s the poem that Midler shared.

Each day I’m filled with the hope

That #Donald won’t be such a Dope

So I get on my knees

And say vip it out plise

As I reach for my new microscope.

Because people were angry that Midler would imply that the First Couple engages in such dirty behavior, she received a lot of criticism on the social media platform. However, she also made a lot of liberals laugh with her outrageous poem about the most intimate nature of the presidential couple.

Conservative Twitter users came up with their own unique responses to Bette Midler’s raunchy poem about Melania. 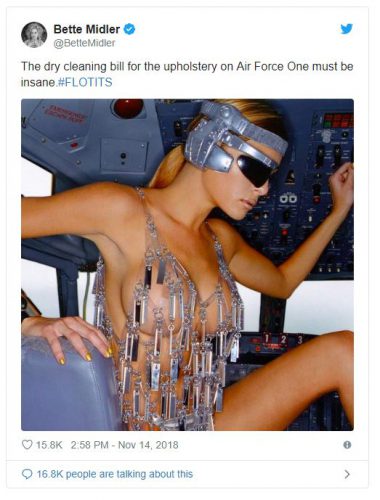 One person named Sam Trasco wrote the following, “There once was a woman named Bette / Who’s as crazy as crazy can get, / Once Donald Trump won / Her brain said, ‘I’m DONE,’ / Now they’re chasing her down with a net.”

Another conservative named Michael Mores wrote an “Ode to Bette.” It said:

“I wish I may I wish I was bright, but I’m not, and as a result, it took me three weeks to get this poem right. When I was young, I stuck to my guns and knew what I was good at, but politics came, and, I became dumb. So now I’m old, nasty, ugly, and bummed!”

Although her poem to Melania was heavily criticized and ridiculed, Bette Midler came out swinging the next day with a direct attack on Trump.

“With every f**k-up how / He cries, Fake tears from his squinty blue eyes, / He’s so full of Malice. / Every Tom, Dick and Alice / Will cheer his Electoral Demise.”

What do you think about Bette Midler’s outspokenness against the president? Does it surprise you to see her targeting both Trump and his wife, Melania?