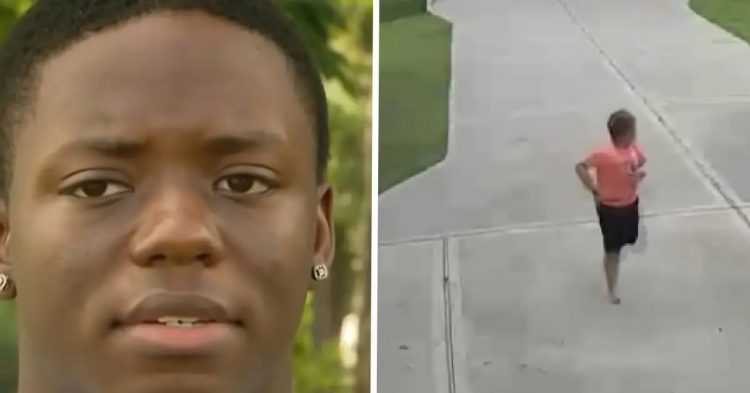 One afternoon, Mason Lindman, 6, found his life in jeopardy. The young boy had been outside playing with his friends, enjoying the sunshine, when, out of nowhere, a wild dog came rushing at the group of children. The children froze in place like statues, and the dog stopped its charge. Instead, the canine stood a few feet away from the group of children, snarling at them and growling, baring its teeth in a homicidal grimace.

Mason mistakenly made direct eye contact with the dog. As soon as the canine realized that Mason was looking at it, the dog charged the boy, jumping on him and knocking him to the ground in the Houston area neighborhood. Mason’s two friends did not know what to do as they saw the dog ravaging their best friend. They froze for a few seconds until they realized that they had to save Mason from the attacking dog and ran to his house to get someone to help him.

As the two friends abandoned Mason as the dog chomped on his body, the boy’s mother, Jillian Lindman, watched in horror from her view inside the home. She had heard the children screaming and was shocked to see the look of fright in the other children’s eyes. At this moment, she realized that the dog attack was a lot more dangerous than it appeared from her place in the home. And she knew that her son’s life was in grave danger if someone did not hurry to shoo the dog away.

Jillian dashed out of her home to help her son. However, someone had beaten her to the desperate boy. His name was Grant Brown. He was a nineteen-year-old man living in the area who noticed the dog attack and decided to put his life on the line to rescue Mason from the vicious attempt on his life.

“As soon as I noticed, I just ran over there without thinking. And I didn’t know how, but I knew I had to get the dog off of the boy,” Grant Brown said.

Grant rushed toward Mason and the violent attack dog. The pit bull looked up as Grant approached and realized that it had to fend off this new threat. The dog left Mason beaten and chewed on the ground as it charged Grant with all of its fury.

The dog lunged at Grant, who led it away from the injured boy. Mason got to his feet and ran to the safety of his home and his mother’s embrace. Jillian found her boy covered in blood with torn clothes and tears to his skin.

As for Grant, the dog was faster than him. Although he ran from it as fast as possible, the dog caught up and tackled him to the ground. However, Grant was strong and kept the dog’s teeth away from his vulnerable flesh. Eventually, he managed to scare the pit bull off.

Grant became a hero in an instant.

“I just wanna give the guy a hug, you know. There’s nothing I could do but just say ‘thank you,'” Jillian Lindman said.