Couple’s Wedding Video Is Going Viral For Being “Disrespectful” 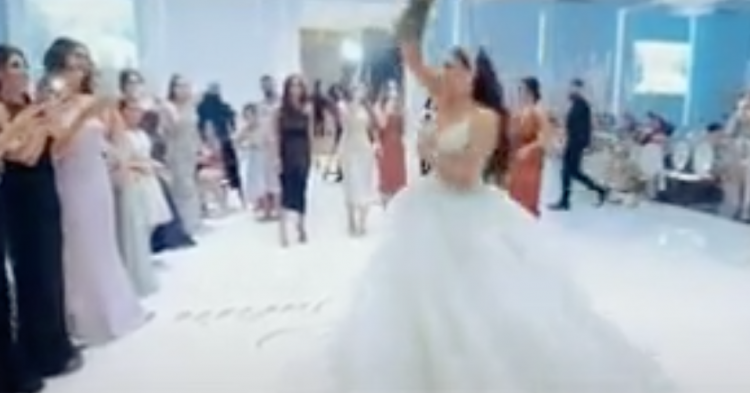 The bride’s bouquet toss is a popular moment during a wedding. However, one wedding turned the tradition on its head when the groom’s best friend hijacked the bouquet toss to make a proposal. Footage of the moment was uploaded to TikTok by the groom, who seemed supportive of his friend for hijacking the wedding, but TikTok users were deeply divided on the issue and could not seem to come to an agreement about whether the groom’s friend was out of line or not for stealing the spotlight during the wedding.

In the viral video, the groom records the bride’s bouquet toss. However, the bride surprises everyone when she turns around and hands the flowers to a friend. Usually, the bride tosses the bouquet blindly to a group of eager women waiting behind her. The person who catches the bouquet, according to tradition, is the woman who is supposed to get married next.

When the friend receives the flowers, she looks surprised. But when she turns around and sees her boyfriend taking a knee to propose, she starts to lose control as the realization that she’s about to become engaged to be married overtakes her.

The video of the mid-wedding proposal was uploaded to TikTok by groom Laiven Bene. He captioned the video, “When your best mate proposes at your wedding,” along with a series of hashtags to drum up views.

Although Bene supported his friend’s proposal, TikTok was not as supportive. People were divided on whether or not the friend should have used the wedding as a chance to propose. Was he stealing the spotlight away from the bride? Or was it all right to do?

Many people felt it was fine because the groom and bride were part of the plan.

“That is real friendship right there!” a top comment says. “The bride was secure enough to know that that wouldn’t take away the shine from her.”

However, many people found it outrageous that someone would propose marriage in the middle of another couple’s wedding.

“You wait your whole life for the perfect wedding day just for someone else to make it about them,” one user wrote.

“I would never let this happen,” another person wrote.

“I think it’s disrespectful to even ASK to propose on someone’s special day,” another added.

Bene later clarified that his friend had not come up with the idea to propose during the wedding. Instead, the groom came up with the idea. He ran it by his bride, and they both felt that the bouquet toss would be the perfect moment for their friends to get engaged.

“Me and my wife were more than happy to give two minutes out of our night for our best mates,” Bene explained. “Our wedding was still magical from start to finish.”

The proposal went viral on TikTok as people waged a furious debate about whether or not the moment was acceptable behavior during another couple’s wedding.

Watch the short video clip below.

Do you think this other couple should have found somewhere else to propose, or was this a good idea?