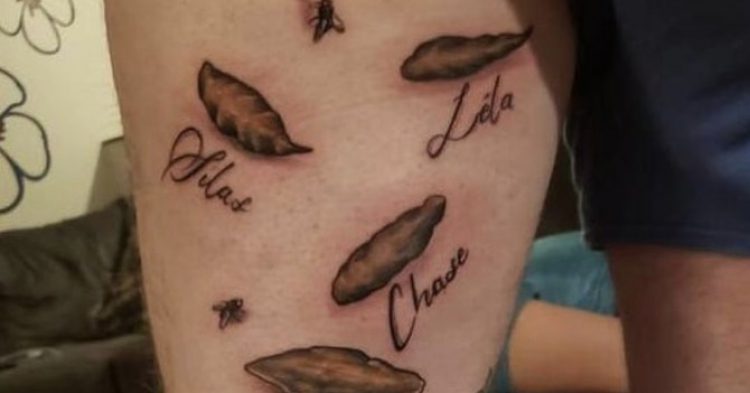 A doting dad decided to get tattoos symbolizing each of his six children. The dad, who decided to upload an image of his tattoo online, was ridiculed by strangers who called his idea “f***ing gross.” The reason that so many people criticized this dad’s display of affection was that he decided to tattoo an image of each of his six kids’ poops with their names next to it.

Yes, dad took images of his children’s feces and then brought those images to a tattoo artist. The dad ordered the tattoo artist to ink the images of poop onto his leg and then write each child’s name in fancy script next to their turd. Although the doting dad loved the tattoo idea, he shared it online. However, people on the internet were not very excited by his tattoo idea. 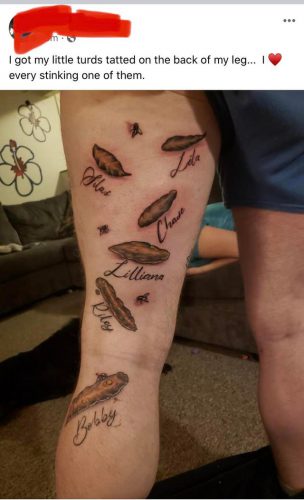 Dad wrote, “I got my little turds tatted on the back of my leg. I love every stinking one of them.”

While he may be reveling in his love for his children – even their stinky parts – strangers on the internet were not so keen on the idea.

“Extra points for the realism of sweetcorn in the shit. Minus points for being f***ing gross.”

“He should have taken a picture of their actual first solid turds and had them tattooed.”

“I didn’t even notice (the sweet corn) at first. They had me with the flies.”

“If I saw it on the street, I’d assume it was leeches. Until I saw the corn.”

“I wonder if she used stool samples from each of her children to get the realistic variation in size and shape? ‘Silas, let mama take a pic of your poop before you flush it so I can get it on my leg.’”

“Because, of course, somebody who’d get this tattoo has six kids. Unless they’re his dogs, but still.”

“I wish my name wasn’t on this person’s leg. I hate that I see my name next to a turd tattoo.”

“Getting literal s**t permanently tattooed on your body. That’ll show those exes!”

“There are so many better ways to commemorate your children than this (at least I’m assuming those are the names of their kids).”

“At first, I thought her named his s**ts, then I realized it’s actually somehow much worse.”

“Imagine updating that tattoo if one of the children transitions. (Of course, knowing white poverty culture, they probably wouldn’t be bothered to call a trans person by their proper name anyway).”

“I was at first thinking, ‘why does this person have dead leaves tattooed on their leg?’ Then the reality set in.”

“I am most irritated that they couldn’t think of different names for the girls. I guess there’s no guarantee they have the same mom.”

“People like this don’t usually live past 50 because of their unhealthy habits and dangerous lifestyle. Too bad they somehow manage to produce so many children. Yuck”

What is your reaction to this smelly tattoo?