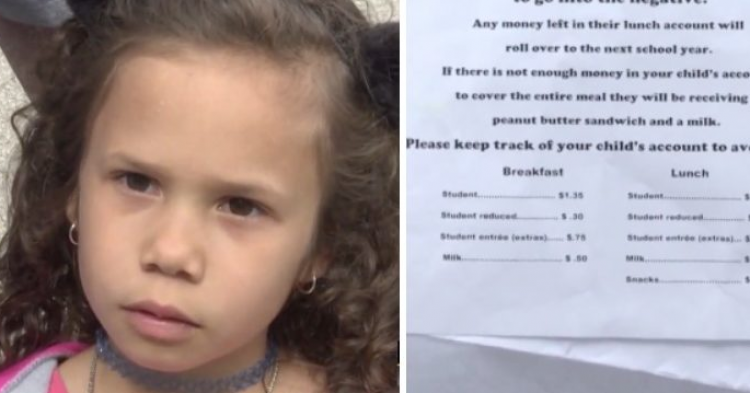 When a hungry little girl picked up her lunch meal from the school cafeteria, she was eager to get to eat it. However, the child, who attends kindergarten in the generous state of Indiana, came up to the cashier to pay for the food. When the cashier took a close look at the lunch debt that the little girl had amassed throughout the year, the cashier denied her food and forced the little girl to put the food back while all of her peers watched.

Anya Howard is just six-years-old and should never have been subjected to the lunch-shaming incident just described. However, the administration at Southwest Elementary School in Indiana believe that girls like Howard need to be punished because their parents cannot afford to give the money required to provide lunch.

Usually, Howard has enough money in her lunch account to pay for food. However, on this particular day, she was denied a hot meal because her parents had not refreshed the balance. It was not even like the little girl had amassed a lunch debt of anything – although that’s exactly what you would think would happen for a lunch worker to deny a little child food.

Because the lunch worker refused to allow Howard to eat the hot lunch, she had to go back and return it – while her classmates watched her and laughed at her. She then got handed a dinky peanut butter and jelly sandwich. All of the kids in the cafeteria laughed at Howard for not having money to buy lunch – and even the cashier snickered along with them.

“They were laughing at us, and they got more food than us,” Howard said.

Because Howard was shamed in front of so many children, her grandfather refers to the incident as the “cafeteria walk of shame.”

He said, “When she was talking to me about it, she was more than ‘sad.’ I mean, that’s embarrassing for a little six-year-old.”

Dwight Howard, her grandfather, wants the policy to be changed. He doesn’t think children, especially little kids as young as six, to be denied food simply because they lacked some money.

The lunch that Howard had wanted to eat that day cost just $2.25. Because she only had $0.10 left in her account, she was denied the purchase. Her family had never been notified that her lunch balance had run so low because if they had been told, they would have refreshed it so she wouldn’t go hungry. Instead, she was given the walk of shame.

Superintendent Kent DeKonick of Greenwood Community Schools said that parents should be receiving reminders when their children’s lunch balances fall below five dollars. However, sometimes the reminders do not make it to the parents.

“It is not an uncommon occurrence for multiple students to be served the alternate lunch on any given day,” he said. “Any time this happens, our staff looks to handle all of these as discreetly as possible.”

Do you think this little girl should have been given the lunch walk of shame? Or should the school do better?