Farmer Spots Large Python Spitting Up His Meal, Devastated When He Realizes Who Is Missing (video) 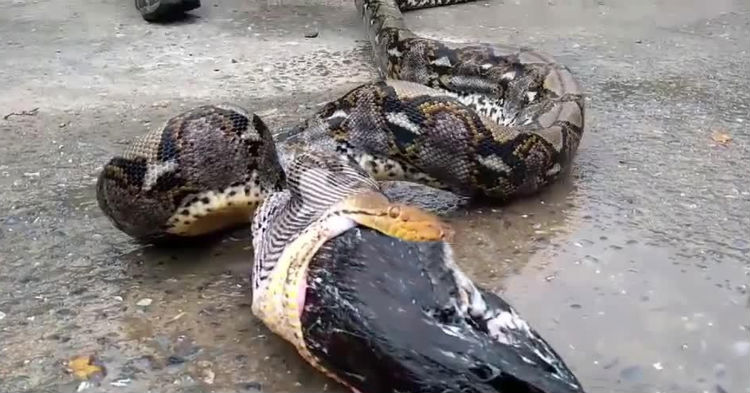 Pythons are one of the largest, deadliest snakes in the world. A farmer from Pathum Thani, Thailand woke up to find two of his prized fighting roosters missing. He often entered his fighting cocks into matches around town and earned a lot of money from them. And when he noticed them missing, he felt angry and worried.

Without them, how would he pay his bills? Soon enough, the farmer named Nut Wattana was able to point the finger of blame at a likely offender. This time it was a 15-foot python that had swallowed the fighting cocks whole. How did Wattana know? The snake had a bulging belly.

Before he knew to suspect the python, he thought the roosters had escaped the coop. But then he saw the creature hanging from the roof. This giant snake had a bulging belly and was right where he needed to be to snatch up Wattana’s champion fighting roosters.

While it was probably too late to save the lives of his roosters, the farmer sought out help from rescuers in the area. Together they were able to force the snake to regurgitate his fowl.

As it was happening, Wattana captured the sickening display on video. You can watch the 15-foot snake pushing the rooster out of its mouth feet first. It is utterly disgusting.

The rescuers use a metal rod to force the snake to gag up the prized fighting rooster.

When the snake has its mouth open, you can see the deadly fangs protruding. A rooster would not stand a chance against his massive predator. But pythons do not rely on their teeth to kill their prey. They use the fangs to trap their victim, and then they wrap their strong bodies around the victim and squeeze it to death.

As the snake starts to push the rooster out of its belly, the fowl’s feet protrude out of its mouth.

At this point, the snake’s body starts to convulse. And the contracting lasts for a few minutes until the entire bird plops out into the dirt. It is layered in slime.

Wattana found the other fighting rooster nearby. On December 27, another two of his chickens went missing. This python has been working overtime to harass the farmer’s stock.

Wattana remembers the morning because he did not hear the sound of the roosters crowing like they normally would.

“I didn’t hear the sound of the two cocks in the morning so went to look for them. I saw the python had eaten one of the birds, which cost me altogether about 30,000 baht ($940). I can’t save the birds now. They were two of my favorites. Thankfully I have a lot more roosters and chickens. I forgive the snake because it was just their natural instinct.”

Although Wattana lost about $1000 worth of fighting roosters in the snake attack, he does not hold the killing against the snake. The snake was just trying to survive. But Wattana will probably invest in better fencing and other protective measures to prevent this kind of thing from happening again.

What is your reaction to this disturbing footage?