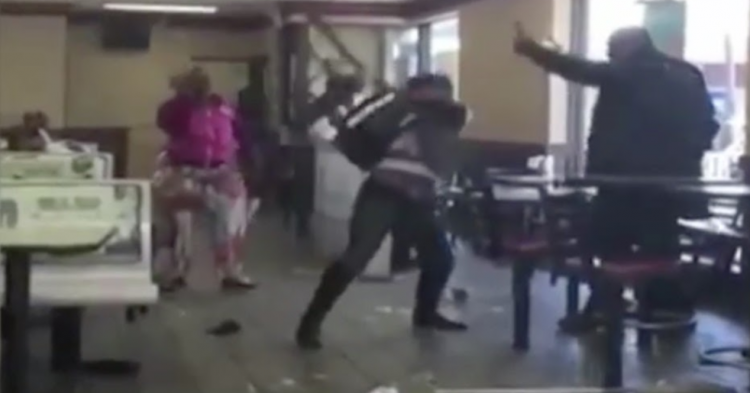 Have you ever gone to a fast-food restaurant craving breakfast only to find out that the workers already switched over to lunch? There are few things that are enraging as that. But most normal people get over the disappointment quickly and get on with their lives. Maybe they even order a cheeseburger and eat the item as a sort of brunch or late breakfast.

But when these two women walked into the McDonald’s, they were met with the bad news that the store was no longer serving those items. They’d switched everything over to lunch, and didn’t have the breakfast sandwiches available for sale anymore. These two women were not happy with that news. They asked again and were again met with the same message. Instead of adjusting, they refused to compromise on their stomach’s directive to fill it with McDonald’s breakfast items and launched into a violent assault on the restaurant and its employees.

You read that right. These two women were so hungry for McDonald’s breakfast items that they were willing to trash the establishment after they showed up too late to order. Maybe this was one of the reasons McDonald’s updated their menu to include all-day breakfast options. If too many people were blowing up and fighting employees, it was probably a much cheaper proposition for McDonald’s to open up space in their kitchen for breakfast at any hour of the day.

The video footage below begins with the two vandals standing at the door of the McDonald’s location. They exchange a few angry words with one of the employees, and then all hell breaks loose.

When the woman in pink and her buddy approach another group (including one person wearing a McDonald’s uniform), the crap hits the fan. A chair is thrown, and the McDonald’s brawl begins. Someone had the wherewithal to capture the unprecedented violence on camera because no one would have believed it otherwise. How does a full-fledge brawl erupt because the breakfast menu is no longer available for purchase?

Animalist screams blare throughout the recording. The women are enraged and have gone berserk over their inability to purchase the food they desire. The woman in pink hurls a chair at a man, who tries to remain calm amid the chaos. Then another attacker throws a second chair at the man. Somehow he does not even seem to flinch as he is barraged with the blunt weapons. 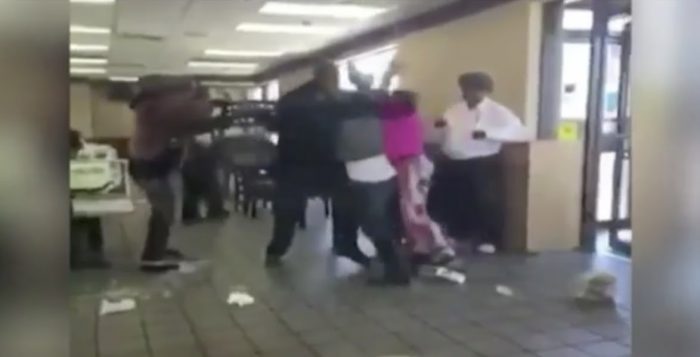 The second woman then turns her attention onto a broom handle, which she uses as a club. She smashes it against the man with so much force that it snaps in two. That’s when the video cuts off. It is unclear how much more violence occurred following this attack on the man.

Reports do not indicate how many arrests were made or if any were made.

Chasing News, on YouTube, wrote the following description of the video included below:

“The video from the McDonald’s located on 52nd and Chestnut Street in Philadelphia shows two women who apparently missed the 10:30 deadline for breakfast and exploded when they were denied McGriddles. It’s not clear if the man who was the target of their anger is a security guard or another customer, but he responded like a superhero. The man was holding the angry women off as they threw chairs and insults his way. He even seemed unfazed when one of the women took a broomstick and broke it over his head.”

How passionate are you about McDonald’s breakfast?