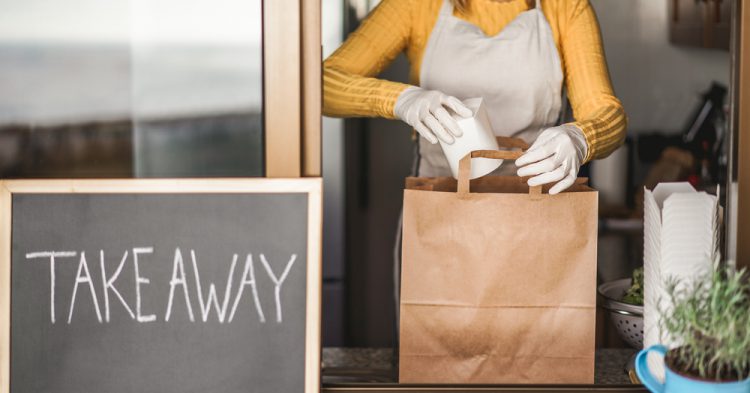 One Massachusetts state senator is taking aim at something that gets his goat – staples. The lawmaker hopes to prevent restaurants and food delivery services from using staples to close takeout bags because they’re not that safe. Although this might not seem like much of an issue to most people, State Sen. Sal DiDomenico hopes to sneak through legislation that would ban staples from being used in takeout bags throughout the entire state of Massachusetts.

The state senate will be talking about staples in takeout bags during their Thursday meeting. DiDomenico added the item to the agenda for the meeting and hopes to get other legislators to discuss his proposal to ban staples from takeout packaging in order to keep people safe from sharp edges.

DiDomenico of Everett hopes to get other lawmakers to vote in favor of his staples ban. In order to get as many people on board with his plot as possible, he kept the bill short and sweet.

“No food delivery provider operating within the Commonwealth shall use staples in order to seal bags or containers carrying raw or prepared foods or beverages.”

DiDomenico has been trying to ban staples from food delivery packaging for some time now. During a previous session, he filed a similar proposal as an attachment to several other bills. However, those issues were not resolved by the close of the previous meeting, so it was unlikely that the state senator got the opportunity to speak about staples like he wanted to.

As it turns out, DiDomenico has a personal vendetta against staples in delivery food packaging. During a recent appearance on a news radio show, he explained why he wants to ban them for good.

“I’ve definitely found staples in my food,” he told GBH.

Although DiDomenico’s proposal seems simple enough, it does face opposition from business leaders. The state director of the Massachusetts National Federation of Independent Business, Chris Carlozzi, submitted a written statement begging lawmakers not to ban the use of staples in food delivery packaging.

He wrote, “On behalf of those small and independent business employers in the Commonwealth, I urge you to oppose Senate Bill No. 1408, banning the use of staples for food delivery.”

Carlozzi continued, “This proposal is simply unnecessary and extreme. Stapling delivery bags is essential, as most Massachusetts eateries are experiencing a major increase in takeout food sales in reaction to the COVID-19 pandemic. Thousands of restaurants throughout the Commonwealth use staples to seal food packages without incident and presents no risk to the health or safety of consumers. Restaurants seal bags with staples to keep food warm, prevent spillage, or avert tampering with an order once it has left the restaurant.”

He concluded: “For all of these reasons, small business owners oppose Senate Bill No. 1408 banning the use of staples for food delivery and urge you to report this bill with an unfavorable recommendation.”

Although DiDomenico’s ban on staples in takeout food packaging might seem like a good idea, it does face some opposition. Carlozzi argues that the bill is simply unnecessary and extreme. On Thursday, lawmakers will discuss this issue during their weekly meeting to see if they can come up with an effective solution for everyone involved.