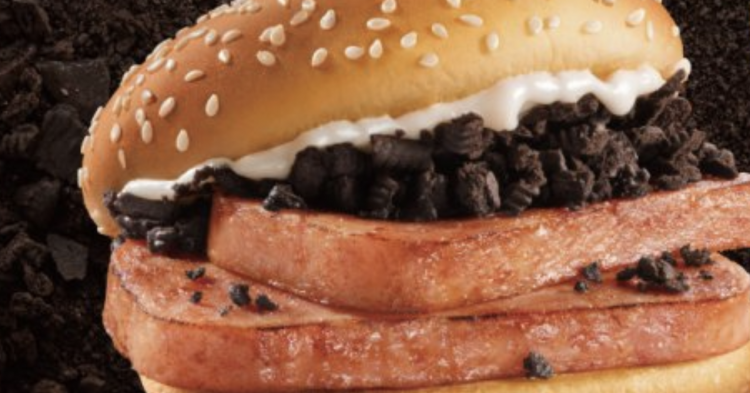 After months of testing and prototyping a new menu item, McDonald’s is prepared to premiere their new “spam burger.” Although the food scientists at McDonald’s thought it was an ingenious plan to substitute perfectly good beef for canned pork, the general public has a different opinion. But the new spam burger gets even weirder because McDonald’s tops it off with an Oreo cookie crumble in case you didn’t think the burger was disgusting enough.

The new item will only grace the McDonald’s menu for a limited time. It first became available to the general public on December 21, 2020, and was immediately met with repulsion. Although the burger is only available in China, it has sparked outrage and scorn from McDonald’s customers the world over.

China is a very competitive market. McDonald’s was hoping to break through the chaos of the numerous food options available to the Chinese consumer by creating something no one had ever heard of before. They decided they would remove the beef patty from a burger and replace it with slabs of canned pork and top off the savory sandwich with Oreo cookie crumble.

“I thought it was delicious,” said a comment signed Feifei Mao Enthusiast on the Sina Weibo microblog service. “Is that because I love McDonald’s too deeply? Or is something wrong with my taste?”

The spam burger uses two slices of Spam from Hormel Foods, LLC, along with Oreo cookie crumble from Mondelz International. The burger is also topped with mayo to make it even “better” for the Chinese customer.

McDonald’s claimed that the limited edition burger was part of their “members only” promotion.

“There is no need to release unnecessary products,” said a comment left on the company’s microblog account.

McDonald’s has called their new creation a “Lunchmeat Burger.” They only plan to sell 400,000 burgers at most. Although it is unclear how many people in China are buying this bizarre burger, it is clear that people on social media are criticizing it heavily.

“When you hate someone but have to invite him to dinner, you can ask him to eat McDonald’s Oreo lunchmeat burger,” said a separate comment on Sina Weibo.

The Spam Oreo burger was not available for long in China. McDonald’s China decided to allow people to buy the bizarre sandwich for one day and one day only. As you can imagine, many people were curious to try the weird meal and had to go to try it themselves.

In the YouTube video below, you’ll learn more about the McDonald’s Spam Oreo burger and how to make one for yourself at home if you’re so inclined. The content creator uploaded a comment about the Spam Oreo burger that said: “What’s much more difficult to articulate is the overwhelming sense of frustration you get eating the Spam Oreo Burger. Because you kinda expect it to be gross, but it’s not gross. It’s just not good. So the mind immediately reels as to whether it’s possible to actually make it good.”

Would you ever try this burger from McDonald’s?