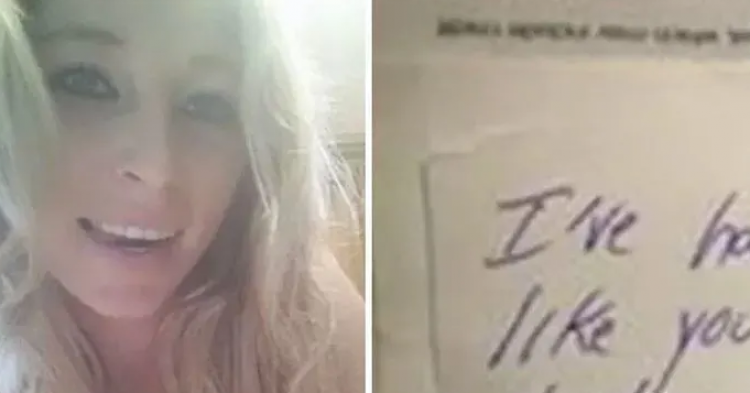 An Alabama mother and her son in need were waiting for the doctor when a stranger did something that shocked her beyond belief. The mother and her son were in the waiting room of a health clinic in the great state of Alabama because she needed to follow up with a series of surgeries she had undergone during the last year – her son accompanied mom because he was home from school sick that day.

Melissa Simms from Pell City, Alabama was delighted when a stranger took notice of her and her seventh-grade son, Trey. The pair were waiting for mom to see the doctor to follow up on surgeries she had had within the last twelve months or so. 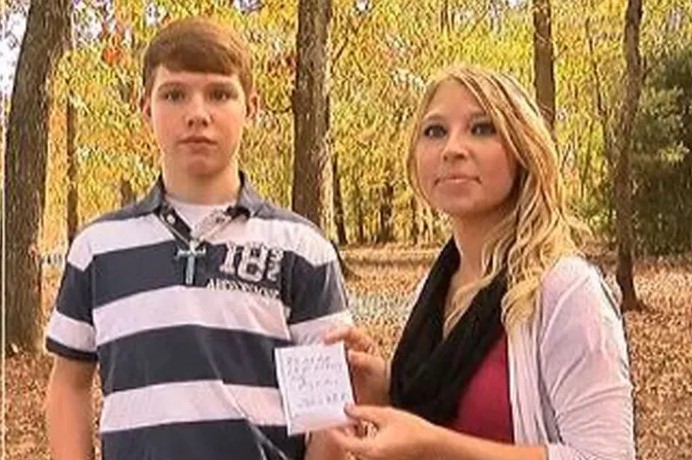 Simms’s story takes a dark turn when she realizes she doesn’t have enough money to cover her doctor’s copay. These payments are required at the time of service to help cover the rising medical costs associated with healthcare treatments and visits to doctors. Health insurance plans cover a portion of the treatment and then buck the bill to the patient who is expected to cover either a copay or a coinsurance payment, both of which can be quite steep given the type of doctor the person is visiting.

“Me and my husband woke up and split our last $10 for gas, for him to go to work and for me to make it to my doctor’s appointment,” Simms told WBRC. “All day I was stressed about how I am going to make supper for my kids.”

While mom went into the doctor’s office for her private checkup, Trey waited in the waiting room for mom to finish up her follow-up appointment. While Trey was waiting for his mother to receive the medical care she was scheduled for, a stranger woman approached Trey and gave the young seventh-grade student a big smile. Then she handed Trey an envelope and told him to give it to his mother because she was in desperate need. 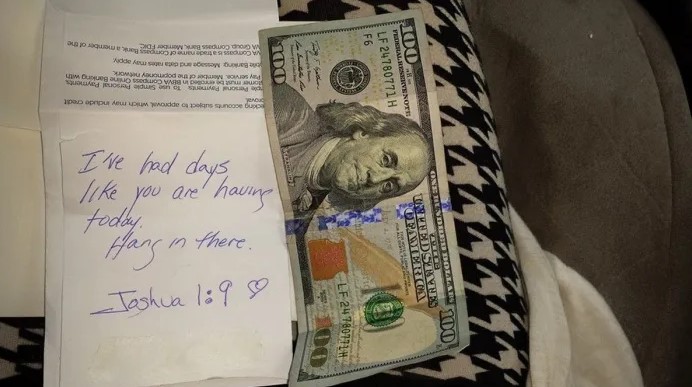 Eventually, Simms finished her visit with the doctor. When she came out, she rushed out as quickly as possible to avoid talking to reception about her copayment, which she knew she was not able to afford. As she and Trey walked to their car in the parking lot, the boy handed his mother the envelope from the stranger woman. Simms could not believe what was hiding inside of it.

The envelope contained a one hundred dollar bill and a note referring to the Bible verse, “Joshua 1:9.” In the Bible, the verse reads: “Have I not commanded you? Be strong and courageous. Do not be afraid; do not be discouraged, for the Lord your God will be with you wherever you go.”

Simms was overwhelmed by the stranger’s generous donation to her cause.

“It is a complete feeling of peace, just like everything is going to be OK,” the mother said. “If I would have known what it was, I would have told her to thank you.”

Simms paid her copay and was able to afford dinner for her children. She shared the story on Facebook where it went viral.