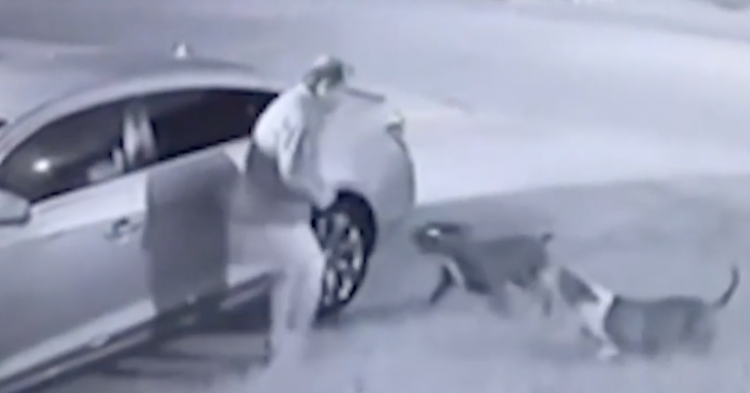 A Texas man was out for a morning walk when he had a close run-in with death. Two vicious pit bulls attacked the 68-year-old victim and nearly ended his life. If it was not for the fast reaction from Good Samaritans in the neighborhood, the victim would have likely died from the dog attack, and his life as he knew it would have been brought to an end.

“It seems to me that somebody had been feeding them gunpowder or something,” neighbor Elmer Levigne said. “I ain’t never seen dogs this vicious.”

Levigne is a retired deputy sheriff, so he had previously received training that helped him respond to the situation. As a gun-carrying Texan, he knew he was going to have to use his firearm to stop the dog from killing the victim.

But before he opened fire on the animal, another neighbor, Darrel Berryman, rushed over to the scene and tried to rescue the 68-year-old victim of the attack. He heard the man screaming for his life and happened to be close to a tree trimmer, which he brought as a weapon to fight off the dogs.

“It was killing the man, and all I could do was try to save him,” Berryman said. “’Cause he kept saying, ‘Help, help!’”

When Berryman approached the scene, the dogs fled. Berryman knocked on another neighbor’s door for help, and that’s when one of the dogs came running right back to finish what it started with the victim. It looked prepared to end the man’s life with a final lunge and attack.

Thankfully, Levigne was ready to help. While he was on the phone with 911, he carried his firearm out into the street and took aim at the attacking dog. He warned other bystanders about his decision to open fire on the animal. But he said that the dog was so violent and vicious that he did not have any other choice but to fill the dog up with lead.

Levigne struck one of the dogs with a bullet, wounding the animal. The gunfire scared the dog away from the 68-year-old victim who was just clinging to life following the brutal attack.

Meanwhile, Berryman continued to tend to the victim.

Paramedics arrived on the scene and used an ambulance to transport the victim to a nearby hospital. If the neighbors had not been quick in responding to the dog attack, he might have lost his life. Fortunately, the man is doing better now and was able to conduct a FaceTime video call with his family from the hospital.

“If it would have been a minute later, he wouldn’t have been alive,” Berryman said.

Authorities have moved the two attack dogs to animal control. The animals will be quarantined for ten days, and their owner was questioned by police and could face charges related to the horrific dog attack in Texas by the two pit bulls.