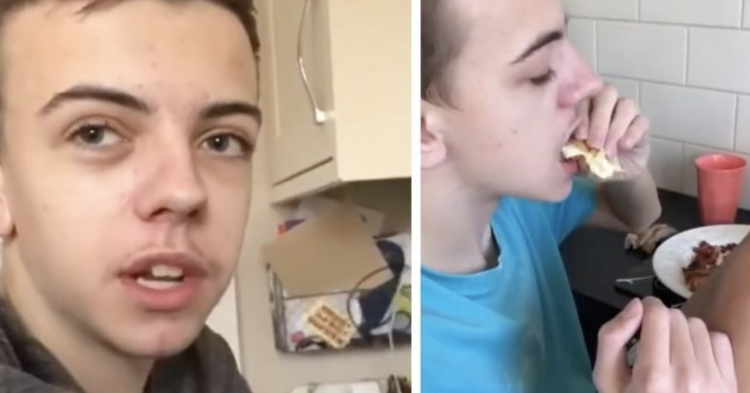 Ever since he was a young child, Ben Simpson has been a picky eater. Every parent of a picker eater knows just how challenging it can be to deal with. Parents just want their children to eat the healthy meals that get put in front of them. The more they resist and refuse to eat, the more frustrating the experience gets for all involved – parents and children alike.

While picky eaters are common among children, Ben Simpson was one of a kind. The boy was so picky that he would not eat anything his mother put in front of him except for his favorite dish – sausages. His condition was so severe that doctors have come up with a name for it – avoidant restrictive food intake disorder or ARFID.

After Ben’s mother, Wendy Hughes, weaned him off her breastmilk, she learned he was a picky eater. While he devoured salty “finger foods” like fries and other appetizers, he would not consume anything with nutritional value like a fruit or vegetable. This worried his mother because she wanted her son to grow up as a healthy person – not a sickly, weak child.

Although Wendy thought that Ben would eventually get over his picky-eating phase, she could not have been wronger. Ben’s pickiness grew worse and worse. By his fifteenth birthday, Ben would only eat a specific brand of sausages. He would consume these greasy items three times per day for every major meal.

Wendy got so worried about her son that she feared he would want to eat sausages for the rest of his life.

She told SWNS, “It is frustrating. Sometimes you just think, ‘Oh God, will you just eat it?’ But then Ben gets upset and teary.”

As you probably expect, Wendy tried everything she could to get her son to eat normal food – and not just his greasy sausages. Eventually, a family friend suggested she bring the boy to a hypnotist.

Wendy, 55, picked up the phone and called David Kilmurry, a cognitive behavioral hypnotherapist, who vowed to cure her son of his picky eating.

Ben had become so picky. It affected the rest of his life.

When at gatherings, “he would just sit there, crying, or he would refuse to go where the food was,” she said. “If we went to a friend’s house, he just wouldn’t eat anything. He’d say he wasn’t hungry, and it was just a nightmare.”

But mom was eager to try hypnosis.

I didn’t think it would work,” she said.

Nevertheless, she brought her son to the first appointment, which was two hours long, and a follow-up. Then his problem disappeared.

“His phobia was extreme,” Kilmurry told SWNS. “It was a struggle enough to get him . . . in front of the screen. I knew straight away he had ARFID and diagnosed him there and then.”

Now Ben is eating everything, including fish.

“Yesterday, a video of him eating fish said to me that he’s cured. He has responded to the hypnosis beautifully,” said Kilmurry. “Fish for an ARFID sufferer is a no-go. It produces retching and gagging at just the very thought of it.”