Toddler Wants To Make Friends With A Deer, But We Never Expected Its Reaction 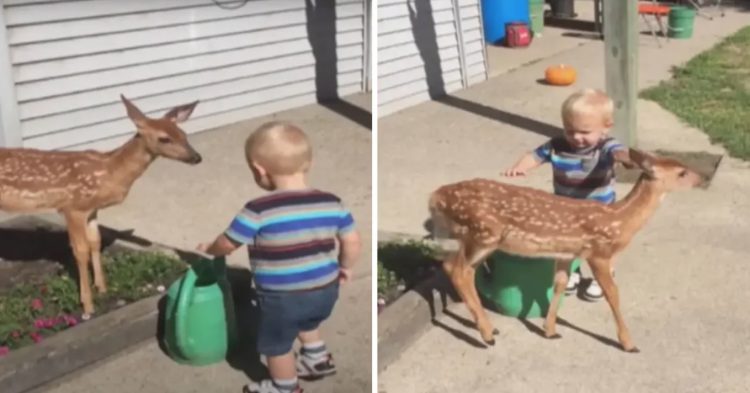 In many parts of the United States, deer are nothing more than a nuisance. Their populations have raged out of control for far too many years, which has led to larger numbers of people taking their rifles out of storage to aim and fire at these four-legged creatures during hunting season. Although deer hunting remains an extremely popular pastime among America’s fans of the second amendment, there are also many places that connect humans to deer to help alleviate stress and provide fun.

Petting zoos and other deer parks are great places for families to explore nature and get a close look at an adorable deer. But sometimes, on rare occasions, deer and human beings meet “in the wild” and form a lasting friendship. In the absolutely adorable clip included at the bottom of this story, you’ll be able to cast your gaze onto a toddler boy in a striped T-shirt becoming friends with a fawn in the flower garden.

Like any great movie, the clip begins in the midst of the action. The deer has already made an effort to approach the boy. Despite the inherent risk of venturing out from safety, the deer has traversed the family’s yard and come to the edge of the flower garden. Now, it awaits the boy. Will he return the gesture? The deer waits patiently to see.

After checking with his parents, the boy approaches the deer. But, instead of reaching out to stroke the soft fur of the deer’s hide, the boy bends forward to grab the green plastic watering can from the pavement.

But the deer has other ideas. With the boy’s head bent down toward the watering can, the deer presses its snout to the boy’s ear, getting a good whiff of the boy any compacted earwax. This sudden move shocks the boy who steps back, startled, and betrayed that the deer would make such a sudden and unexpected move.

As the boy comes to grip with the warm, moistness left in his ear from the deer’s soft nose, the smiles and realizes that this deer is here to play. Excitement blossoms in the boy like a drop of food coloring spreading through water.

He holds out his palm for the deer, but he is too far. Only having learned to walk a few months before, the boy clumsily circumnavigates the watering can and closes the distance between the deer and himself. Ever curious, the deer extends its snout to the center of the boy’s face and establishes a connection. The boy reciprocates by petting the deer along its muscular neck.

Then the boy wraps his hands around the deer’s face. It’s the deer’s turn to be surprised by the sudden gesture of loving-kindness. Should the deer trust the boy? Or does the boy pose more of a threat than the deer had initially suspected?

Fortunately, the tension dissipates almost as quickly as it came. The deer and the toddler boy explore their newfound connection, their budding friendship. Their comfort for one another strengthens. Their willingness to show love grows.

What do you think about this darling moment captured on film?