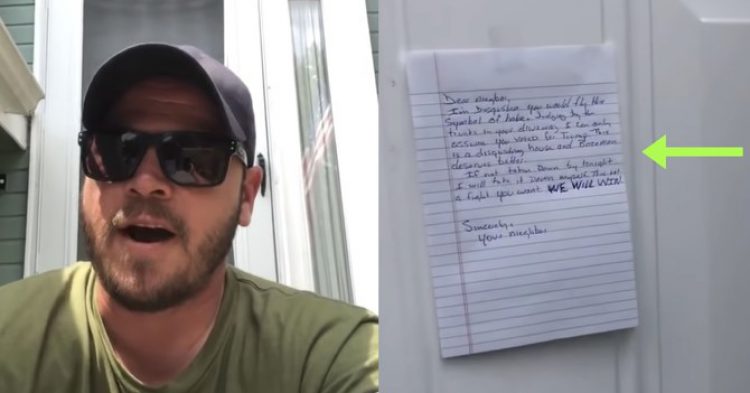 When a neighbor took offense to a “symbol of hate” in a man’s yard, the resident of the “hateful” property refused to take it down. Because the man who wanted to keep displaying the offensive symbol was a veteran of the United States Air Force, he believed it was his right to display the symbol in question. That’s why 36-year-old veteran Justin Schroeder shared a Facebook video exposing the unidentified neighbor as a sensitive meddler.

One day when Schroeder had been out running errands, he returned home to find a note tacked to his door. During the Facebook Live video, the Air Force veteran stared into the camera, and then said, “Man, I don’t even know where to start. I’ve met some stupid people in my lifetime, but this takes the cake.”

Because the neighbor revealed sensitivity to a “hateful” symbol posted on Schroeder’s property and shared a note about it, the veteran took it as a personal attack and decided to expose the incident online.

One reason that Schroeder felt entitled to do this was that the note itself was rather hateful and judgmental. As you’ll read in the sentences that follow, which are taken directly from the note left on the veteran’s door, you’ll see that the neighbor was not prepared to have an honest and open discussion about feelings – but rather a rant.

“Dear neighbor, I am disgusted you would fly this symbol of hate,” the note begins. “Judging by the trucks in your driveway, I can only assume you voted for Trump. This is a disgusting house, and Bozeman deserves better.”

At this point, because he was reading the note aloud, Schroeder said, “You’re right – it does. Pack your s**t and leave.”

The letter continued, “If not taken down by tonight, I will take it down myself. This is not a fight you want. We will win. Sincerely, your neighbor.”

So what exactly is Schroeder displaying on his property that has sparked so much outrage among the neighbor? The American flag…

“I’ve met some stupid f***ing people in my lifetime, but I can tell you right not, that flag right there? That flag ain’t coming down.”

During the Facebook Live feed, Schroeder then walks the camera out to his front yard to show off the beautiful American flag he has soaring on his property. Because he’s a veteran of the armed forces, he believes in that flag and believes people should stand up for it – because he did.

“This flag flies year-round at my house,” he added. “It will never come down. And to the person that thinks they’re gonna try to take it down? I’ll break your f***ing fingers.”

Since uploading the angry response to the neighbor’s message about Schroeder flying the “symbol of hate,” it has amassed more than 700,000 views and been shared nearly 20,000 times.