Video Captures A Fight Over A Plane Window, And Now It’s Going Viral 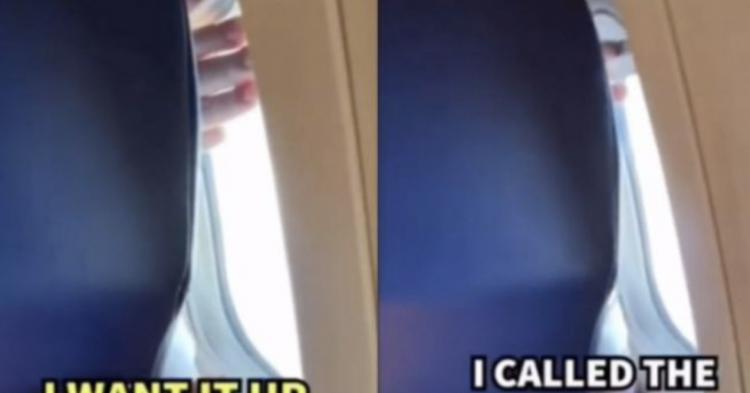 As more and more people flood TikTok with videos, it can become difficult to decipher the truth from the lies. And this story proves just that. While onboard a flight, Will Mantley continued to fight with the woman in the seat behind him over whether or not the window should be open or shut. Although the window was adjacent to Mantley’s seat, the woman kept reaching through the crack near the wall to change the window position to her preference, which sparked a very tense fight between the pair.

The woman in the seat behind Mantley posted a TikTok video complaining about him. This sparked Mantley to do the same. He shared a video of how the woman behind him kept trying to change the window position despite it clearly being the window next to his seat.

“I was the guy in the seat in front of her,” Mantley captioned his TikTok. “Who was right in this situation?”

Throughout the video clip, Mantley fights with the passenger behind him. The woman wants the window shade to be down while Mantley wants it up so he can get a good look at the world beyond the window throughout the flight.

“Can you just keep it shut, please?” the woman behind the camera asked Mantley. He pulled up the window shade at the beginning of the video. The woman said, “I’m trying to sleep.”

“I want it up,” Mantley said in response. “I want it up. I like to see where we’re going.”

The woman then called the flight attendant by pressing the help button. That did not work to intimidate the man, so the woman ordered him to put down the window shade.

“I’ll be here all day,” she replied. “You’re being childish.”

The flight occurred days before the holiday vacation and was bound for Colorado. Mantley claimed that the flight attendant showed up to help the pair settle the dispute. The flight attendant offered the woman an eye mask, but she claimed that she “doesn’t like the feeling” so she was eventually moved to another part of the plane where she could get the rest she required.

“The flight attendant came up and apologized for that issue that I had with her, and I had a good rest of the flight,” Mantley said. “Fast forward to a couple of days ago, I was scrolling through TikTok, and this meme page had posted … the video.”

TikTok users largely sided with Mantley about the window issue.

“That’s your window. You paid for that seat,” one commenter wrote. “I think you handled this in the best way possible!”

“She really had the audacity to say ‘you don’t own the plane’ uh … neither do you,” another added.

“Bro she was harassing you,” another wrote.

Who do you think was right in this fight? Should the woman have let Mantley leave the window up, or should he have put it down at her request?