VIDEO: Man Starts A Fight With A Kangaroo To Save His Best Friend 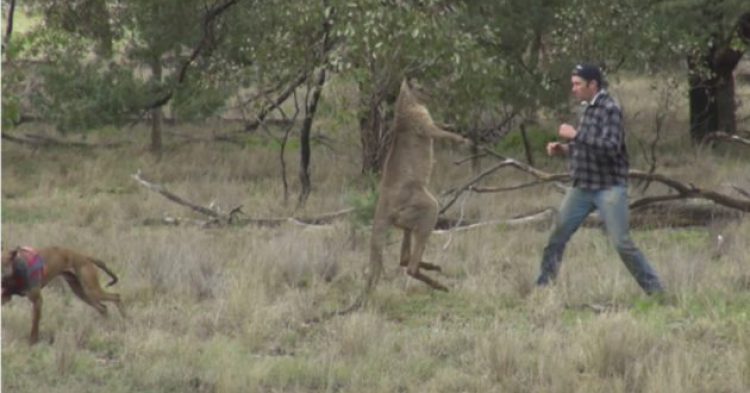 Some people would do anything for those they love. And for a lot of people, that promise extends to their pets. Pets are a part of the family. That’s why one man was willing to risk his life – and his teeth – to box with a kangaroo to protect his best friend. Because things went wrong on a hunting trip, the man with the gun found his dog in a treacherous situation with only one way out to safety – for him to step up and challenge the wild kangaroo to a fight.

While a group of hunters was wandering around Australia looking for animals to kill, they felt like they were on top of the world. Unfortunately, the tables turned quickly when a wild kangaroo came out of the brush and grabbed the dog by the neck. Although the men kept on screaming and begging for the kangaroo to drop the hunting companion, the wild animals were not going to let it go that easily.

Eventually, a man jumps out of the safety of his truck and approaches the kangaroo. But the wild animals are not done hurting the dog. It punches at the dog in its death grip one more time, trying to scratch it with its claws. Eventually, the kangaroo releases the dog, which runs away with its tail between its legs, whining in pain.

The hunter knows the odds are against him. Kangaroos are a lot stronger than the average human. Nevertheless, he takes a boxing stance and prepares himself to fight to the death with the wild animal to defend his dog’s honor.

The man shuffles his feet back and forth. He tries to trick the kangaroo into thinking he is going to make a move and then does the opposite thing to throw the animal off balance.

After a few backs and forth movements, the man finally goes in for a punch. He lunges his fist toward the kangaroo and smacks the marsupial across the face. It’s a solid punch and sends the kangaroo flying backward.

Greg Bloom wrote about the experience for Viral Hog:

“A group of hunters got together to help a young cancer sufferer (terminal diagnosis) with his last wish of catching a 100 kg (220 pounds) wild boar with his dogs. One day while hunting one of the highly trained dogs was chasing some pigs by scent and collided with a big buck kangaroo that then held and wrestled the dog by its protective gear (boars have tusks like knives), the owner was horrified that his dog or the kangaroo would get hurt and run in to save both parties.”

He describes how the man punches the kangaroo.

“The punch stops the roo and makes him think about the situation, giving the owner and the dog time to disengage from the big wild animal and leaving it to hop off, and I suppose wonder about what just happened. We laughed at the absurdity of the situation and at how unfortunate it was for the dog and kangaroo. Our 6 foot 7-inch friend felt no malice to the kangaroo but had to step in and fix a bad situation before it got worse.”