Waitress Can’t Hold Back The Tears After A Widow Left This Note With Her Tip. 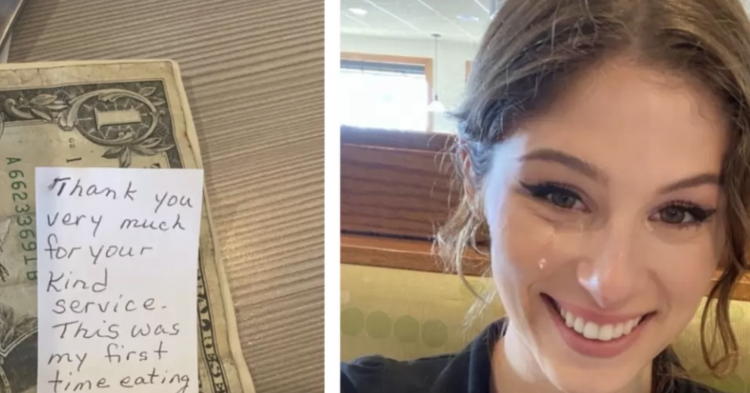 The restaurant was bustling with happy diners as waitress Megan King bopped from table to table, serving food and clearing dirty dishes. She was working as hard as she usually does – which is harder than most – and everything was going well. But then King noticed a small woman eating alone and began to wonder about her story. Because King was assigned to the woman’s table, she served her and found that they had a polite interaction – but it did not seem like anything out of the ordinary until the woman left a handwritten note with her cash.

The note changed everything for King, who had been so focused on the short-term success at work that she had lost sight of the bigger picture. The note that the old woman wrote said: “Thank you very much for your kind service. This was my first time eating out alone since my husband passed. I was hoping I could get through it.” 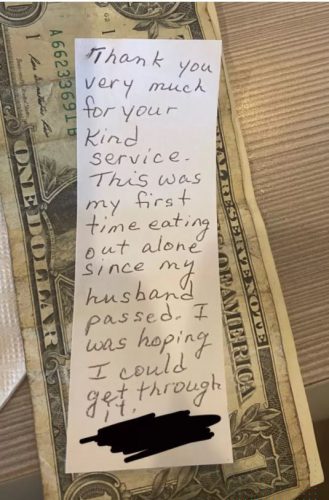 King was brought to tears.

“[The customer] came in about halfway through my 17-hour shift, and it was on Sunday, which is always pretty busy,” said King. “About halfway through her meal, it started to slow down, so we chatted for a few minutes. Small talk, nothing too deep. She told me she was almost 70 and had been slowing down a bit. She said she just wanted to stop by an old favorite for a bite.”

Unfortunately, King was so touched by the heartwarming note that she didn’t get a chance to speak to the woman more. In hindsight, she explained that she had hoped to have been given a chance to learn more about the woman and ask her lots of questions about her life. 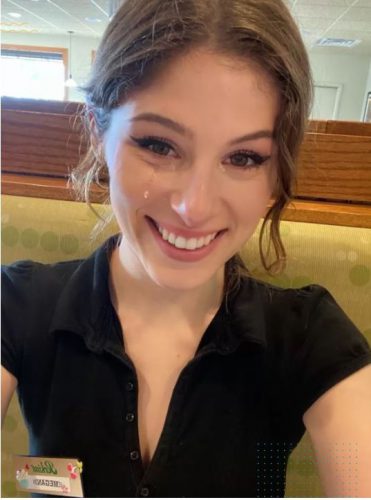 “In retrospect, I wish I would’ve taken her quiet as an invitation. I think that’s what she wanted, looking back,” said King, according to Newsweek. “She kept looking up at me, so I assumed something wasn’t right with her meal or that she needed something. I guess she did, in a way. (She needed) an ear.”

King was pleased that she was able to provide such a pleasant experience for the widow. But she found herself touched by the interaction and the note as well.

“I was very surprised,” shared King. “As soon as I read that she’d lost her husband, I lost it. I had to use the restroom to get myself together enough to tend to my other tables even though I really didn’t have time to take a rest.”

Although many people on social media applauded the woman’s kindness, some critics complained that it seemed that the old woman had given such a meager tip. King defended her customer by saying that “not everyone can afford to tip well.”

She added, “A lot of our customers are older and living on fixed incomes, so they tip what they can. They are always welcome, no matter how much or little they tip.”

This heartwarming story first went viral on Twitter when King shared photos of the note and herself crying. What do you think about it?