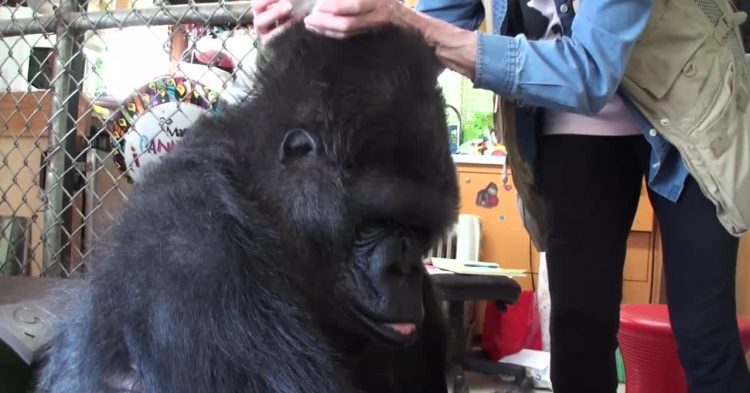 If you hear another person tell you that animals don’t have feelings, turn around and walk the other way. That person doesn’t know what they’re talking about! This footage proves once and for all that animals, including gorillas, experience emotions and feelings that are just as every bit as intense as those experienced by human beings. Watch this footage from Rumble that shows Koko the gorilla falling in love with the box of kittens that she received for her birthday.

When Koko opens the box and sees that she’s been given a litter of kittens for her birthday, she could not have been happier. Koko first picks up the tiny gray kitten that she called “Ms. Gray” and looked upon her with adoration and motherly love. This is love at first sight and proves that animals can feel intense and complicated feelings, just like human beings can.

While Koko is showering Ms. Gray with all the love she can muster, Ms. Black, another kitten, is returning the favor. Clearly, Ms. Black adores everything about Koko, as is evident from the way the kitten stares up at her gorilla mother.

The footage then jumps to another moment when Koko is getting groomed. The large gorilla is allowing her handler to comb the hair on her back, and as she does this, the two kittens climb around Koko’s back, trying to chase after the comb.

“That is amazing. She is so big, and they are so tiny. Yet she is so gentle. I loved it.”

“I saw a story years ago where a lonely gorilla was given a kitten. The kitten used to go and explore a bit during the day but always returned a bit later, and they used to curl up together and cuddle each other.”

Some viewers and longtime fans of Koko posted about how this footage makes them nostalgic since Koko has since passed away.

“I loved reading about and watching everything about sweet Koko. She is gone now, but we owe the great gorillas. A life of hope! God bless. Sweet Koko.”

“This was very, very good news when posted, but Koko has sensed passed away. She was Robin Williams’s friend too, and as we knew and loved Robin, he got right in the cage with her. She was a gentle giant. R.I.P. Koko.”

While Koko did pass away, this footage can bring you back to the good old days when she was walking this earth as an example of what is possible. You’ll get a chance to see just how much Koko loves babies. Even when she has a baby toy, she showers it with love, which goes to show you how much Koko was in love with these adorable kittens.

Watch as Koko falls in love with Ms. Gray and takes her out of the box to hold her gently. As she showers Ms. Gray in love, Ms. Black really wants to get some extra attention from Koko, the gorilla.