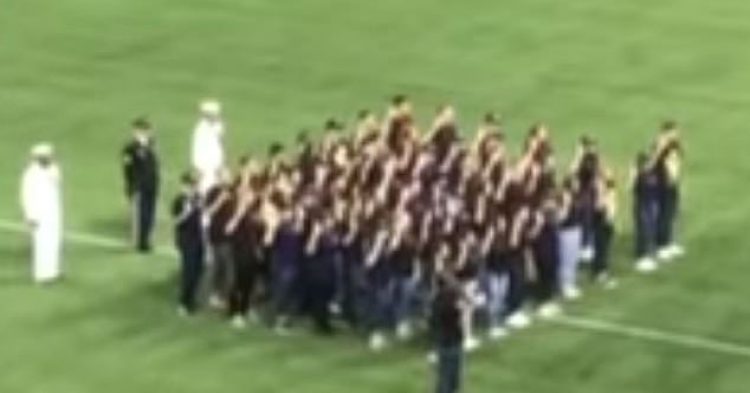 It’s not often that a National Women’s Soccer League match makes headlines news. But on September 11, 2019, when a group of United States Armed Forces members were being sworn into service, thousands of people in attendance at Providence Park stadium in Portland, Oregon erupted in loud boos when they heard that the enlistees were asked to pledge their allegiance to the United States of America.

Although the ceremony was supposed to go off without a hitch, the crowd at the Portland stadium did not like how the military demanded these new enlistees pledge their allegiance to America. The military ceremony was supposed to be a highlight during the match between the Portland Thorns and the North Carolina Courage. However, it turned into a disaster when the crowd booed at the top of their lungs in opposition of the military personnel in the field.

Although the 17,000 people attending the game initially cheered as the group of enlistees walked onto the field, they booed when they heard what the government expected them to do. The crowd supported the people in uniform, but they did not like how the enlistees were expected to take the Oath of Enlistment, which makes the military personnel pledge their allegiance to the United States of America and no other country.

Because fans had come to the stadium to watch a soccer match, they slammed the league for turning the event into a military display. Because the fan code of conduct bans political signage at matches, the fans felt that it was a double-standard for the league to expect them to applaud the military when it might not sync up with their political views.

Not only has Major League Soccer been criticized for changing the fan code of conduct, but they also seem to expect something else from themselves and their teams. Because fans cannot display political banners at stadiums, it was bizarre that they held a ceremony to commemorate the military’s loyalty to the President of the United States.

One of the political symbols that the MLS banned was the Iron Front symbol. This shows three arrows pointing down and was initially used by anti-Nazi groups in Nazi Germany. But the MLS felt that the symbol had become too contentious and could no longer be displayed at official matches as it had recently been linked to the Antifa movement.

Another example of this change in fan conduct related to a Utah couple who were stopped from waving a Betsy Ross flag at the Real Salt Lake match, because this flag has become associated with white supremacy groups.

The Utah couple claimed that stadium workers threatened to kick them out of the stadium if they did not stop waving the flag now being associated with hate groups. Although the flag was used in the Revolutionary War, modern hate groups have ruined the patriotic symbol for everyone.