Ben Hubbard loves living with Lainey Clark. But there’s just one problem with her home. It’s haunted. However, no one ever believed Ben and Lainey when they complained about the ghost. But then they decided to get proof that a ghost called “Dave” was haunting their residence – and now they claim to have home security video footage that offers irrefutable proof that the home is occupied by the ghost.

Ben, a gym teacher, and Lainey, an elementary school teacher, first moved into the haunted house in 2018. The property is a three-story townhouse in Buckinghamshire. The couple started noticing strange movements and activity in the house shortly after they moved in a few years ago. 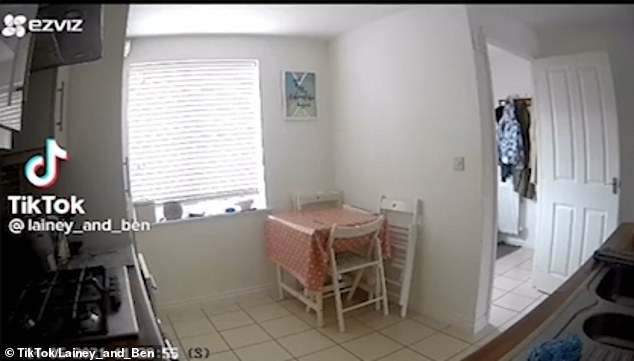 Eventually, the couple became fed up with the presence. They installed a CCTV camera and decided they’d try to catch the ghost in the act of haunting their home. Now, footage caught on that camera shows things going awry. In one clip, you will be able to watch a ghost pull items out of a drawer and throw them about the house.

The footage was recorded at 11:29 am on May 14, 2021, while both Ben and Lainey were out of the hose at work. The kitchen drawer suddenly opens in the clip, and an item from it rises in the air and is seemingly thrown across the room. The item that was tossed was a piece of cutlery, and it hit the window before falling to the ground. 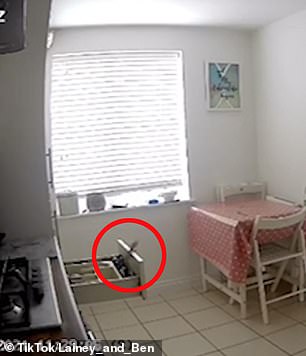 Seconds later, another object flew out of the drawer and was flung to the opposite end of the room. Next, the drawer begins to close without anyone there to push it in.

The video was uploaded to TikTok with a caption that stated, “CCTV cameras coming in handy while we were at work…” Their video has since earned about twenty million views and has been shared by people from across the globe. Many other TikTok users also contributed their thoughts in the comments of the video because the content was so shocking.

“I would never come back to that house,” one person wrote.

Another added, “I would sell the house and move! ASAP!”

“Why do ghosts have to be destructive always? Why can’t a ghost cook something some days or wash or clean?” asked one person.

“If a ghost is going to live at your house, at least tell them to pick up after themselves,” wrote one fan. 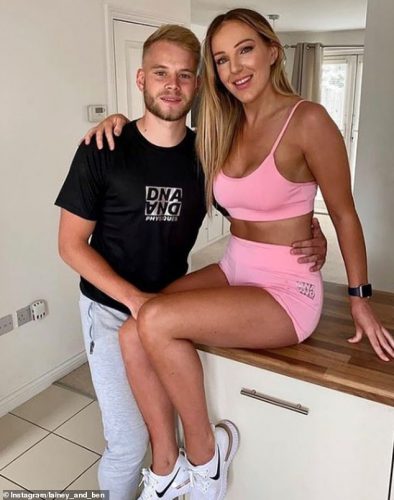 Nevertheless, there were many people who doubted the authenticity of the video clip. One skeptic wrote: “I have such a hard time believing what I don’t witness with my own [eyes]. So many things can be edited these days.”

Instead of being afraid of the alleged paranormal activity in their house, Ben and Lainey seem to be using it. They regularly upload video clips from their haunted house to their YouTube channel. They also discuss how they have worked with a psychic medium to identify the spirit haunting their abode. The ghost is named Dave. He is the spirit of a young man who perished in a car crash close to the property.